Streamed tour for Muti and the Cherubini Orchestra 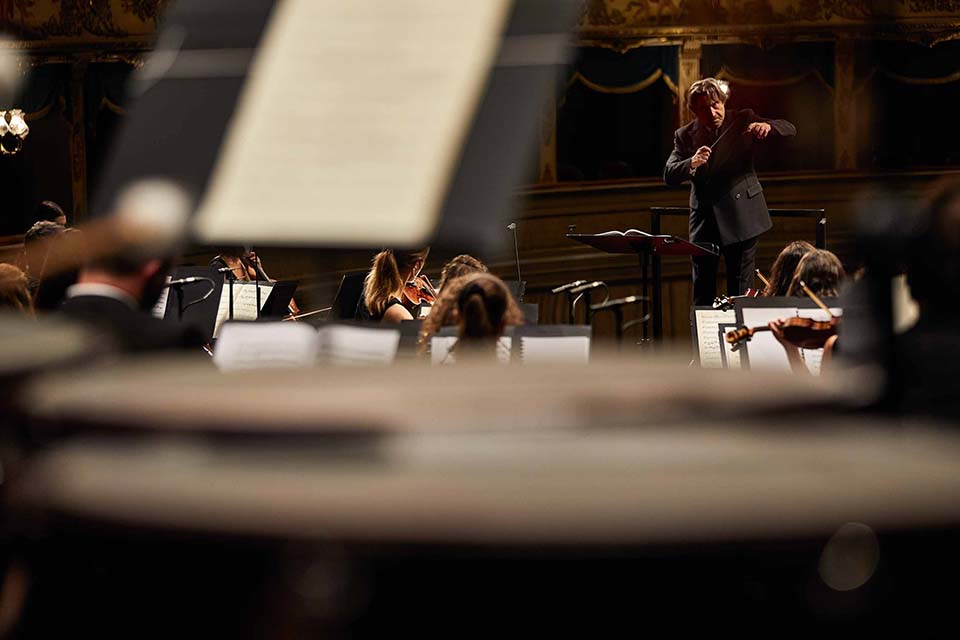 Riccardo Muti and the Cherubini Orchestra in Bergamo, Naples, and Palermo for the concerts, available online from March 21, 26, and 28

Riccardo Muti and his Luigi Cherubini Youth Orchestra renew their commitment to music and the Italian theatres, contributing to keeping their doors open, albeit virtually, with the tour organised by Ravenna Festival: from north to south across Italy, the concerts recorded in Bergamo, Naples, and Palermo will be streamed for free from March 21, 26, and 28 respectively. The performance in the Donizetti Theatre is a gift for the city from BPER Banca; the concert, whose programme features the Sinfonia from Don Pasquale and Beethoven’s Eroica, will be streamed on the BPER Banca website. In Naples, where Muti and the Cherubini will perform the Sinfonia from Mercadante’s I due Figaro and Schubert’s Symphony no. 9, the event has been made possible by the collaboration with Napoli Teatro Festival, which will host it on its official website. The web TV of the Massimo Theatre in Palermo will stream Schubert’s Symphony no. 3 and Dvořák’s “From the New World” Symphony. In collaboration with RMMUSIC, the three concerts will be available for a further 30 days; it will be possible to watch them also on ANSA.it, thanks to the partnership with the agency within the “ANSA for Culture” project, and on ravennafestival.live. The 21st of March, the first day of Spring, has been chosen for the streaming of the concert in Bergamo: a message of rebirth for the city, one year after the first lockdown, and a sign of BPER Banca’s attention for one of the areas which have most suffered during the pandemic. In the Donizetti Theatre, in 2016, Riccardo Muti celebrated fifty years of career with the Sinfonia from Don Pasquale, “because I want to leave you with a feeling of hope and a smile” he explained at the time; today, that wish is even more urgent and necessary. The tribute to the Bergamo-born composer is doubly meaningful since Muti deeply cares for Don Pasquale. In addition to the intrinsic value of an opera which is the arrival point of a great tradition – the Neapolitan School and Mozart – there is a personal reason: this was the very first title Muti conducted in Salzburg at the invitation of Herbert von Karajan. The programme in Bergamo is completed by Symphony no. 3 in E-flat major, Op. 55, Beethoven’s imposing Eroica whose funeral march shifts from solemn melancholy to emotional lament and where the ideals of equality, freedom, and brotherhood unravel. The concert, recorded on March 10, will be available from March 21 on bper.it, ansa.it, ravennafestival.live. The deep love and constant commitment Muti has shown in promoting the rediscovery of composers and works of the Neapolitan School and their crucial contribution to the European musical history had to be in the spotlight in Naples: in the Mercadante Theatre, for a concert which is also a preview for the 2021 edition of Napoli Teatro Festival, the programme will open with the Sinfonia Saverio Mercadante composed for I due Figaro. The manuscript was discovered in Madrid in 2009 by musicologist Paolo Cascio; the score had been created in 1826 on Felice Romani’s libretto for the Spanish capital city, as a sequel to Mozart’s Marriage and Rossini’s Barber. After delving into the operatic world, the programme moves on to the symphonic universe with Franz Schubert’s Symphony no. 9 in C major D 944, “the Great” which, composed between 1825 and 1826, would not be performed until 1839 under Mendelssohn’s baton – Schumann had found it among the composer’s documents. Another rediscovered score, then, a creation of great ambition which represented a bridge toward the late-Romantic symphonism. The concert, recorded on March 19, will be available from March 26 on live.napoliteatrofestival.it, cultura.regione.campania.it, ansa.it, ravennafestival.live. Schubert again, this time his Symphony no. 3 in D major D 200, features in the programme for Palermo, the last destination of this tour; here Muti will be made an honorary citizen for his commitment to spreading the values of peace and brotherhood through the universal language of music. Composed by Schubert in 1815, a few months after his 18th birthday, the Symphony no. 3 was first performed only later on, in London in 1881. This score, one of the composer’s early symphonic works, born amidst an incredible number of Lieder (almost 150 that year), immediately catches the ear for its cantabile quality and the freshness of the melodic invention which unravel after the restless opening Adagio. The musical itinerary ends with a story of social integration: in 1892, Antonín Dvořák was invited by patroness Jeanette Thurber to direct the New York Conservatory, one of the first schools to admit women and Afro-Americans. While discovering the endless spiritual repertoire and the music of the natives, the composer united two popular heritages, the Bohemian and the American – in his Symphony no. 9 in E minor Op. 95, “From the New World”: a true look into the future. The concert, recorded on March 21, will be available from March 28 on the web TV of the Theatre – which can be accessed through the homepage teatromassimo.it – on ansa.it e ravennafestival.live.